An internet search yielded this brief history of Doubledecker Coneflower:
A German plantsman, Eugen Schleipfer found an Echinacea plant that looked very different from the others. After years of selection, a reliable seed strain with two tiered flowers resulted. A set of shorter petals rests on top of the cone while a "skirt" of longer, deep rose-pink petals emerge from the base of the cone. First year plants sometimes produce single flowers. From the second year forward, a high percentage of two tiered flowers appear with either a single or double set of petals. Occasionally, older plants produce single flowers. 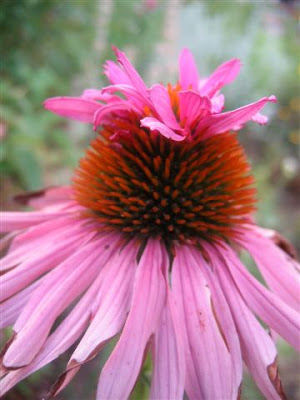 I purchased this as a very small plant 3 years ago from a mail order company. It had only bloomed with single flowers the past two summers, so I was excited this year when I saw some pink flower petals beginning to sprout out of the center cone! I wanted to wait to photograph them until they were fully formed, but unfortunately by the time that happened the original flower was already beginning to brown, as you can see by the tips of the petals. 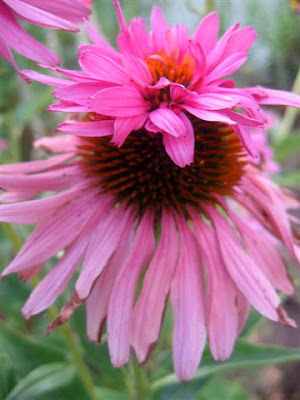 A single bloom, growing out of the original flower. They have a somewhat 'messy' look. 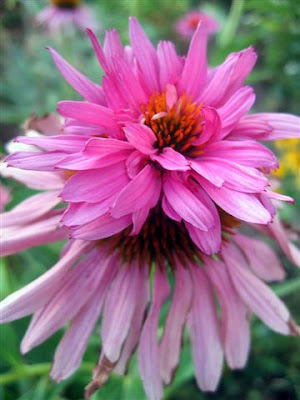 This top flower is double and almost dwarfs the original flower.....making it look a bit top heavy! 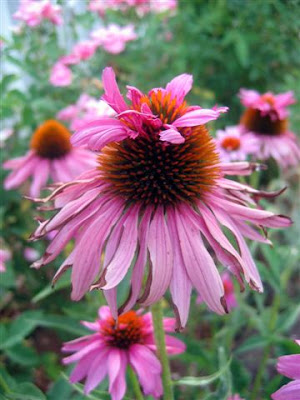 This was my first year to order a few plants from Bluestone Perennials, and Helenium Mardi Gras was among them. Helenium also goes by the name Helen's flower, or Sneezeweed. 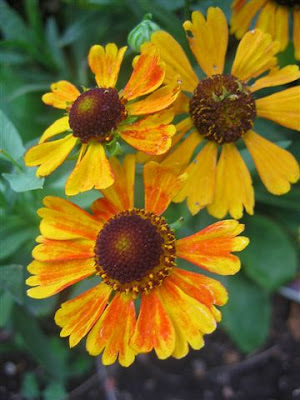 The flower petals are mainly yellow, splashed randomly with red. They have a sort of tie dyed look, which.... for some reason, I seem to be attracted to. (See this previous post.) The brown center cone on some of the flowers appears as though it is wearing a delicate crown around the outside edge....as seen in the bottom flower in the above photo. 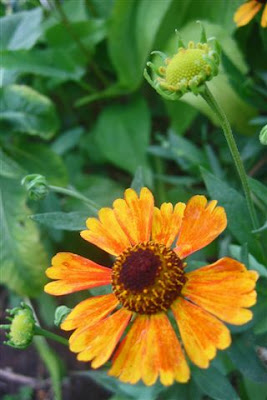 Since Helenium also goes by the name Helen's Flower, I am dedicating this post to Helen...
my sweet sister-in-law. :-)

I was taking some photos of a few new flowers in my garden yesterday, when this butterfly caught my eye. It was checking out the Coneflowers and I got the chance at just one shot.....before it quickly fluttered away again. 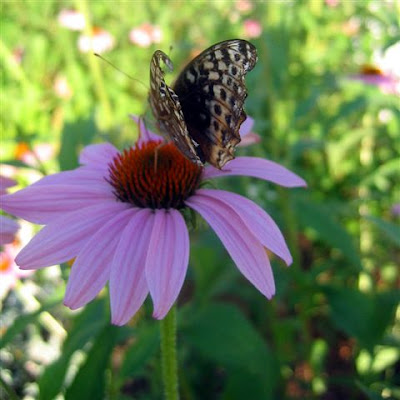 I am not sure what type this is....but it's not one I see often here. Can anyone identify it for me?

Coneflowers are always a favorite of the butterflies.....and me. :-)
I love the fact that they come into bloom just about the time when I am hauling cartloads of spent flowers out of the garden!