There's been a big toad around our house for several years now. We only see him in the warmer months. The rest of the year I guess he hibernates somewhere below the frost line. I usually see him in the flower bed on the north side of the house, where it gets morning sun and afternoon shade. But after a rain, we have spotted him in various other places in the garden. On a cool, rainy day this week I spotted him in an unusual place that startled me a little. 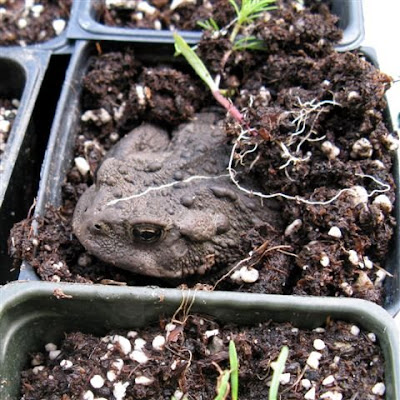 As I passed by a flat of Cosmos seedlings on my porch, to enter the house, I noticed that one plant was dug up and lying with it's roots exposed. Upon closer inspection I was surprised to see Mr. Toad settled down into the nice cool potting soil. I think he was feeling invisible. He is camouflaged quite well, isn't he? As soon as the sun came out again, he was gone. I only wished I could have shown him to my 3 year old Granddaughter, who likes to read Frog and Toad stories.