Here it is almost the end of May, and my poor blog has been quite neglected! So to remedy that, here are some photos of a few of the blooms currently gracing my gardens.... This Columbine is a favorite of mine. I don't remember the name, but it is one of the McKana types. I like the two toned pink color, and the yellow stamens. It blooms longer and stays a nice compact size, in contrast to the bonnet types....which I often end up pulling out because they outgrow their space. 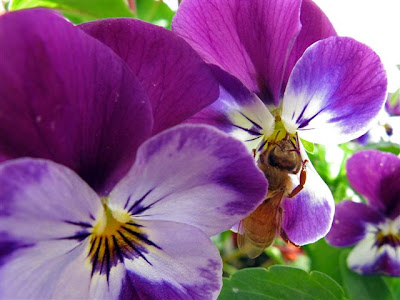 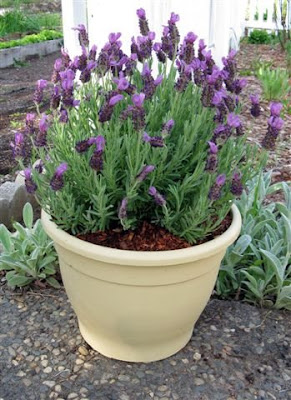 My daughter gave me this lovely Spanish Lavender plant for my birthday. It is a new variety called Lavandula stoechas 'Anouk'. After the first flowers have faded, the stems can be cut back for a second bloom time. And the best thing about it? It is a zone 5 plant, so I can overwinter it here... instead of having to replace each Spring. 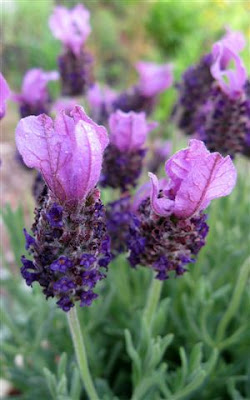 A close-up of the wonderfully scented 'winged' Lavender blooms. 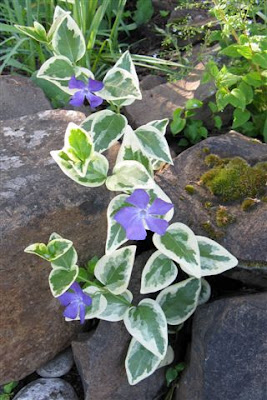 This week brought the first blooms of Periwinkle, Vinca Major 'Variegata'. I love the soft creamy color on the edges of the leaves, which really brightens up the rock gardens. 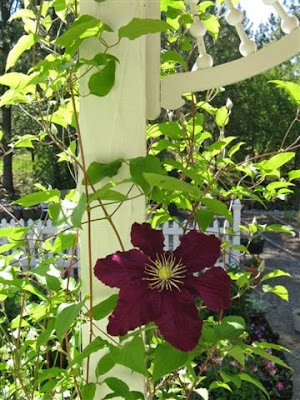 The first bloom of Clematis 'Niobe' opens it's dark red flower on the porch post. 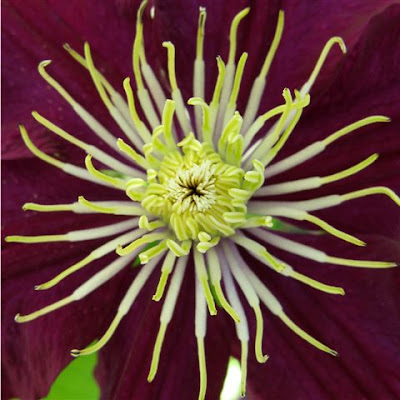 There is a pleasing contrast of the white anthers against the dark blooms. 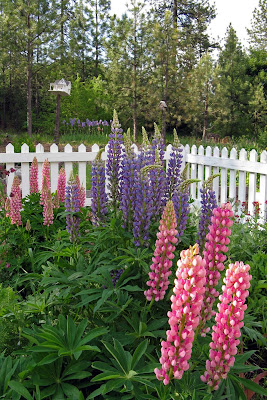 Also making an appearance now are the Lupines. The blue ones are a wild form, which I think have a nice Cottage look. If you click on the photo to enlarge, you can see a bed of Iris in bloom, behind the birdhouse. 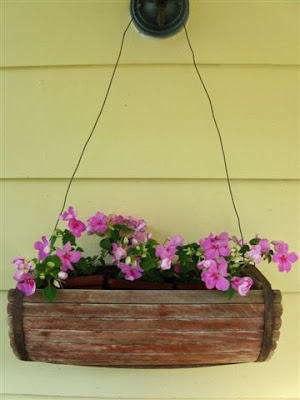 And lastly.... a favorite vintage, weathered wood planter filled with Impatiens and hung from the light under the front porch, where it gets a little morning sun, and then shade for the remainder of the day. This was a great yard sale find, along with 2 others of similar style.

Thank you to so many of you, for your get well wishes, as I have been down with a bout of Pleurisy. Recovery has been slow and is still not complete, but I have been able to do a few small tasks in the garden each day, which helps my spirits! And I have a wonderfully helpful husband, who has been called upon to do many of the tasks I don't yet have strength for.

It has been two years this week, since my first post on Notes from a Cottage Garden. My, how time does fly! In honor of the occasion, I thought I would post some photos of my Spring garden, currently in it's prime. I have so enjoyed the tulips this year, especially since I have been mostly house-bound for 3 weeks with a case of Pleurisy, an inflammation of the tissue surrounding the lung. It is very painful and can take from weeks to months for recovery, with rest being the only effective treatment. It is difficult to rest when I want so badly to be working in the garden, but low energy levels have kept me from doing much. The colors in the garden have given me cheer while I recover, and I hope to be gardening again soon! 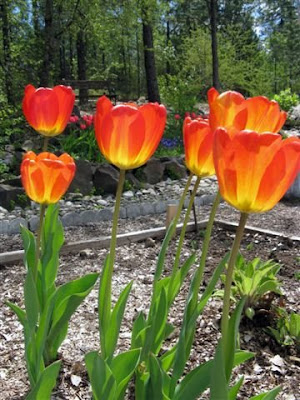 I planted these tulips in the front bed of my kitchen garden last fall. They go by the name 'Daydream', and the color is just amazing! This is a completely unretouched photo, taken on a sunny day. The tulips look like they are ablaze with fire! They started out mostly yellow with a few orange streaks, but now they are mostly orange. The foliage is sort of wimpy, but I can put up with it... in exchange for the beautiful blooms. :-) 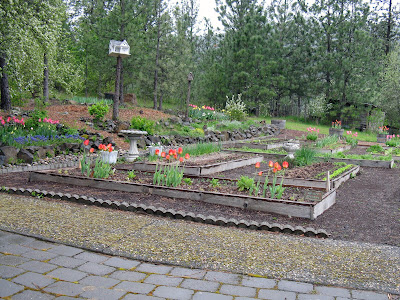 This photo shows the front portion of the garden, off the patio.... with the rock gardens in the background. I added a new tulip bed last fall, just behind the smaller, rustic looking birdhouse. (I left this photo a larger size, so you can click on it to see things up close.) If you look carefully, you can see a sign in the front garden bed which reads "Mom's Garden". It was given to me by my children for Mother's Day many years ago, so is very special to me. In the very back of the photo, nearly covered by trees, is our very rustic chicken coop. One of my favorite beds is behind the birdbath, shown in the next photo. 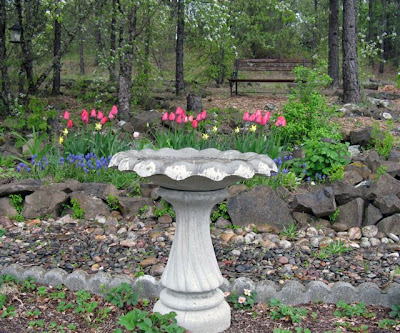 This bed is home to grape hyacinths along the front, with mini daffodils in the middle. (I have forgotten their name, but they are so cute!) In the back of the bed are Tulips called
'Pretty in Pink'. 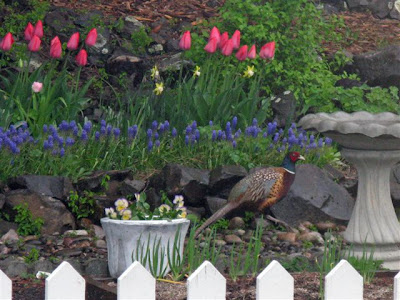 And look who came back this evening for a visit, to the same place where he made a mess a few weeks ago? None other than
Mr. Pheasant!

Origin & History of the Tulip

The tulip is a wildflower said to originate from Persia. In the 1500s, tulips were extensively cultivated in Turkey, and because of their resemblance to the "tulbend" — a turban worn by Turkish men — were called tulipan.

In 1562, tulip bulbs from Constantinople reached Antwerp by ship. Before the turn of the century, tulips had been such a rarity that only the wealthy in Holland could afford them; consequently, tulips became a status symbol for the rich. However, by the 1620s, buying and selling tulips became an activity for merchants, and "tulip madness" ensued. Tulip trading crashed in 1637, throwing Holland into financial ruin. After the Dutch government enforced strict laws for cultivating and selling bulbs, the tulip became the national emblem of Holland.